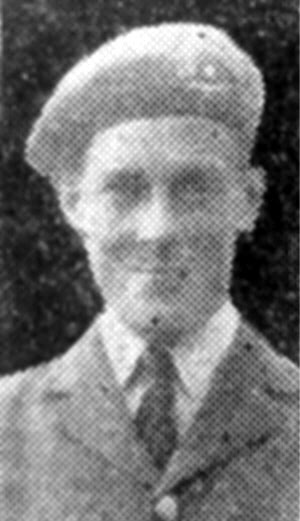 Geoffrey Clegg Wilby was born in the Birmingham area in late 1923, the only child born to Cecil Marshall Wilby and Elsie Clegg, who married at Christ Church, South Ossett on the 22nd November 1922. Cecil was the son of Ossett born school master, Herbert Wilby and his address at the time of his marriage was Sparkbrook, Birmingham, but he was born in Welwick near Hull on the 4th September 1893. Cecil’s father died in 1901 and Cecil moved back to Ossett with his only sibling, Clarinda Wilby, and by 1911, he was working as a football stitcher and then living at South Terrace, Horbury Road, Ossett.

In September 1939 Cecil Marshall Wilby, a leather works cutting department manager and costing clerk, with his wife Elsie (born 29th January 1891) were living at 47, Horbury Road, Ossett. In 1911 this was Elsie’s family home. A third name in the 1939 household is redacted but could be Geoffrey Clegg Wilby who would have been 16 years of age at that time. Cecil Marshall Wilby died in 1974.

Geoffrey Clegg Wilby of 47, Horbury Road, Ossett died on the 8th November 1945 on war service at Fassberg Germany and Administration of his estate, value £278 19s 6d, was granted on the 11th June 1946 to his father, Cecil Marshall Wilby, Company Director.

Flying Officer Clegg died as the result of an accident at RAF Fassberg. It is not known if it was a flying accident. RAF Fassberg was a small airfield on the northern outskirts of the town of Fassberg, Lower Saxony. It is approximately 39km north of Celle, 30km south-east of Soltau, and 95km south of Hamburg. In 1945, Along with many other airfields in Germany, Fassberg played a part in the Berlin Airlift. It was home to a variety of aircraft, military and civil, carrying supplies to Berlin for much of the Airlift. U.S. aircraft were also on station for just over a year. Fassberg was HQ, No 135 Wing from the 23rd October 1945 - 2nd January 1946, during the time of Wilby's death.

The "Ossett Observer" had this obituary for Geoffrey Clegg Wilby:1

"Died on Active Service - Flying Officer G.C. Wilby, Ossett - The death on active service is officially announced of Flying Officer Geoffrey Clegg Wilby, son of Mr. and Mrs. Cecil M. Wilby, 47, Horbury Road, Ossett. The parents were notified of the sad occurrence by the local police on Friday evening, and a confirmatory telegram arrived on Saturday morning from the Air Ministry, stating that their son died on November 8th, and conveying profound sympathy of the Air Council. No information as to the cause of death was given, and apparently, as he was in good health when his parents last heard from him, the news naturally came as a great shock.

Flying Officer Wilby, who was 22 years of age and single, was educated at Dewsbury Wheelwright Grammar School and proceeded to Durham University, where he stayed for 12 months, and afterwards went to London University on a language course for the War Office. He was in the Cadet Corps at Wheelwright retaining his cadet connection at Durham before being transferred to the O.T.C. He had obtained his Inter. B.A. and had been at London University a year when he joined the R.A.F. in August 1943, as an intelligence officer. He went to Normandy about a fortnight after D-Day, and has since served through Northern France, Belgium, Holland and Western Germany. He was attached to 409 Squadron up to the time it was disbanded about three weeks, and latterly was stationed somewhere about 120 miles west of Berlin.

He had regularly attended South Ossett Church and Sunday School and was much esteemed in the district, the deepest sympathy being felt with the family in the loss of their only child, and one whose prospects of a successful career were the brightest. The father (Mr. Cecil Wilby) is manager at the Huddersfield sports goods works of Benjamin Crook and Sons Limited."

Flying Officer Geoffrey Clegg died on the 8th November 1945, aged 22 years, and is buried at grave reference 13. A. 9 in the Hanover War Cemetery, Niedersachsen, Germany. The city of Hannover lies in the north of Germany approximately 290kms west of Berlin.

Many of the graves in Hanover War Cemetery were brought in from prisoner of war camp cemeteries, small German cemeteries and from isolated positions in the surrounding country.

The cemetery contains 2,407 Commonwealth burials of the Second World War, 62 of them unidentified. There are also 39 non-war burials and 10 war graves of other nationalities, most of them Polish.