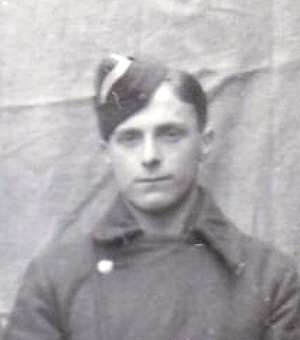 Sometime between 1939 and 1942, the Oldroyd family moved to live in Smethwick in the West Midlands, not far from Sarah Ann Oldroyd's birth place of Sedgley. Benjamin's twin sister Patience Oldroyd was married in Smethwick in early 1942.

Benjamin Oldroyd joined the RAF when the Oldroyd family were living in Smethwick in 1941. He first attended the RAF Bombing and Gunnery School on a six-week course. Flying kit was issued along with a white flash to put in the airman's cap that denoted he was a trainee. At this time the student airmen were promoted to Leading Aircraftsman (LAC) and were awarded a badge of a propeller to wear on their uniform sleeve. In addition to their Gunnery training, the students were also expected to carry out other duties to include airfield guard duty. "Make Work" details like cleaning coal and fire buckets were endured as well as physical training and military drill

After his spell at Gunnery School, Benjamin Oldroyd was first based at RAF Waterbeach in Cambridgeshire with 1651 Heavy Conversion Unit, before joining 214 Squadron at RAF Chedburgh in Suffolk on the 8th April 1943 as an air gunner, part of the crew of pilot Sergeant R.G. Gray's Stirling III bomber.

On the 20th April 1943, the squadron were ordered to bomb the Heinkel factory at Marienehe, Rostock on the Baltic coast. Oldroyd was the rear gunner in Stirling BK800 and they took off at 21:50 hours heading for Germany.

"This A/C attacked the HEINKEL works at MARIENEHE, dropping 1 x 2000HC,1 x 1000GP, 1 x1000LD(37 Mk IV E) at 01:40hrs., from 10,000ft, heading 180M. The night was fine with moonlight, no cloud and visibility good. A thick smoke obliterated the ground detail. The target was identified by run up river, and a fire in factory was seen through smoke screen, and town was identified on run out. Large fire in works and one large and several small fires seen in ROSTOCK. The rear turret was hit by flak from flakship, and the rear gunner was killed. Soon after fuselage raked by fighter. One photo attempted. Route as ordered."

Sergeant Benjamin Oldroyd was the rear gunner and was killed on this, his first ever operational mission. According to Sgt. Rollings: "On returning, flying very low over sea east of Kiel Canal when fired at (almost horizontally) and the rear gunner was killed. There were 120+ bullet holes in aircraft when back on squadron. Because of damage to the aircraft from bullets, it nearly crashed when landing because the aircraft flew to right of runway and we just managed to clear trees on boundary of aerodrome. On the second attempt pilot knew what to expect and the second landing turned out OK."

The crew of Stirling BK800 on the night of the 20/21st April consisted of:

Above: Short Stirling Bomber like the one flown in by Sergeant Benjamin Oldroyd.

Oldroyd's aircraft, Stirling III bomber BK800, piloted by Sergeant Richard Patrick Reynolds was shot down by a night fighter over Germany on the 25th June 1943 with the loss of six of the seven crew.

The "Ossett Observer" had this short obituary on the 1st May 1943.

"Sergeant Benjamin Oldroyd (22), R.A.F., of Bromfield, Smethwick, Staffs., son of Mr. and Mrs. Oldroyd, formerly of Chancery Lane, Gawthorpe, was killed on April 21st 1943 whilst on an operational flight. A full military funeral took place on Tuesday at Smethwick, among those present being his parents, his brother George (who is in the R.C.S.), his twin sister Patty and her husband (G. Tolson, R.A.F.) of Earlsheaton.

He was educated at Gawthorpe Council School, and before leaving the district was employed as a plasterer by Mr. B. Idle, Heckmondwike. George has been stationed in North Britain two years, but has lately been in a Glasgow hospital suffering from a nervous breakdown. Another brother Dick, is in the Middle East with the York and Lancaster Regiment, and a third brother Charlie, who is in the Commandos is as yet recovering from wounds received in the Dieppe raid."

Sergeant Benjamin Oldroyd was killed in action aged 22 years on the 21st April 1943 on his first operational flight. The son of Charles Henry Oldroyd and of Sarah Arm Oldroyd (nee Pearcey), of Smethwick, he was buried at Ruiton Congregational Church Graveyard, Upper Gornal, Dudley, West Midlands.