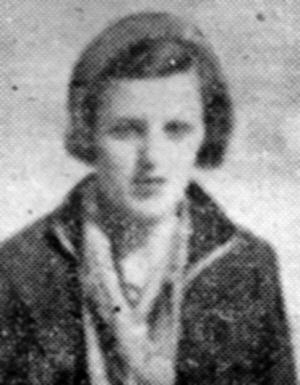 Augusta Myers was born in Spring 1917, the daughter and only child of Ossett rag merchant Oliver Myers and his wife Augusta (nee Mitchell) of 'Greenlands', Dale Street, Ossett, who had married in early 1916 in the Dewsbury Registration District. Mrs. Augusta Myers died in Winter 1937, aged 54 years and her husband Oliver Myers died in Summer 1946, aged 66 years.

The "Ossett Observer" had this obituary for Augusta Myers:1

"Death of Miss Augusta Myers - Promising Career of Ossett Lady Cut Short - The news that Miss Augusta Myers, daughter and only child of Mr. Oliver Myers, 'Greenlands', Dale Street, Ossett, had passed away on Wednesday morning at the age of 25, came as a painful surprise to her family and friends. About three weeks ago, Miss Myers joined up with the W.A.A.F. and went into camp at Bridgenorth, in Shropshire. On being transferred to Morecambe last week it was found that she was far from well, and she was removed to hospital, where it was stated she was suffering from quinsy*. Her father spent the day with her on Monday, and, on being assured that the complaint was taking its normal cause, returned to Ossett. One can therefore imagine the shock occasioned by the message received by him on Wednesday morning that she had passed away about 5:30 a.m.

Educated at Wakefield Girls' High School, Miss Myers proved a successful student, and was particularly keen on commercial subjects, the study of which she afterwards pursued at Huddersfield Technical College. Later, in addition to having private classes of her own, she was appointed one of the county council's commercial subjects teachers, and taught typewriting, etc., at the evening technical institute of Ossett Grammar School with excellent results. She inherited the family interest in national politics and devoted much of her time to the furtherance of the Liberal policy. She held various official positions in the Party at different times, being president of Ossett Women's Junior Liberal Association and a member of the Yorkshire Council of Young Liberals. A capable and well-informed speaker, she took part in propagandist campaigns in the county, and frequently addressed public meetings. In a national test of knowledge and speaking capacity at the annual conference of the Liberal Association of Scarborough, she did remarkably well, coming second in the competition out of many candidates.

At the outbreak of the war she attached herself to Ossett Report Centre, and performed regular duty as a volunteer worker until recently. In the meantime, about twelve months ago, she joined the journalistic staff of the "Batley News", and carried out her duties with thoroughness and efficiency. Well-read and an interesting conversationalist, her company was always instructive, and the deepest regret will be felt by her many friends and acquaintances in her untimely death. During Ossett's War Weapons Week about a month ago, Miss Myers assisted the campaigns by making public appeals for support from the platform of the Palladium. It was her intention, we understand, at the end of the war, to devote the whole of her time to political work.

A member of an old and much-respected Ossett family, Miss Myers' grandfather on the maternal side was the late Mr. Allan Mitchell, who was Mayor of Ossett in 1896/97. Her uncles include Mr. Rowland Mitchell, a former Mayor of Huddersfield and Mr. Ashley Mitchell, the well-known Liberal worker and speaker. On the paternal side, Mr. H.G. Myers, J.P., Ossett is also an uncle. Mrs. Jagger, J.P. is her great-aunt."

* Quinsy, also known as a peritonsillar abscess, is a rare and potentially serious complication of tonsillitis. The abscess (a collection of pus) forms between one of your tonsils and the wall of your throat. This can happen when a bacterial infection spreads from an infected tonsil to the surrounding area.

Augusta Myers died on the 1st April 1942, aged 25 years, and is buried at Holy Trinity Churchyard, Ossett, North Side.3 Augusta Myers' death was recorded in Lancaster.