Arthur Worth was born on the 8th July 1923 in Horbury Bridge, the eldest child of George Worth and Ellen nee Halstead, who had married at Rastrick on the 22nd December 1922. He was educated at Horbury Bridge Junior School and Ossett Grammar School.

Arthur was called up into the army when he was 18 years of age, in 1941 he was conscripted into the Royal Engineers. This seemed strange to his father George Worth because Arthur worked in an office in civilian life. In early 1943, Arthur was sent to Algiers in North Africa.

Arthur Worth had just celebrated his 20th birthday in Algiers where he was stationed with the Royal Engineers. On the 16th of July 1943, Arthur was in Algiers Harbour with 1031 Docks Operating Company, helping to load the Norwegian freighter D/S "Bjorkhaug", which was one of a convoy of ammunition ships; it was just after the Allied invasion of Sicily so the pressure to load quickly was intense.

Arthur was supervising the loading 38 tons of German anti-tank mines by Arab dockers. 1,800 German mines had been collected by Allied minesweepers and they were being loaded for disposal. Due to a mistake in the rush to load the ship, the ignition mechanisms inside the mines had not been removed and they were still live, despite the crew being assured they were safe. 32 tons had already been loaded when there were two huge explosions. It appears that a load of mines fell out of the cargo-nets into the hold, which triggered the first blast. This, in turn, setting off the second explosion. The captain, Ole Sandvik, and 9 of his crew were killed, as were between 300 and 1,000 dock-workers, including, sadly, Arthur Worth whose body was never found.

The resulting fire spread to the nearby "Fort Confidence", a ship loaded with fuel oil. It was towed out of the harbor by the Dutch rescue tug "Hudson" with assistance from the British destroyer HMS "Paladin". Of the 300–1,000 people estimated to have been killed, most were Algerian dock workers. 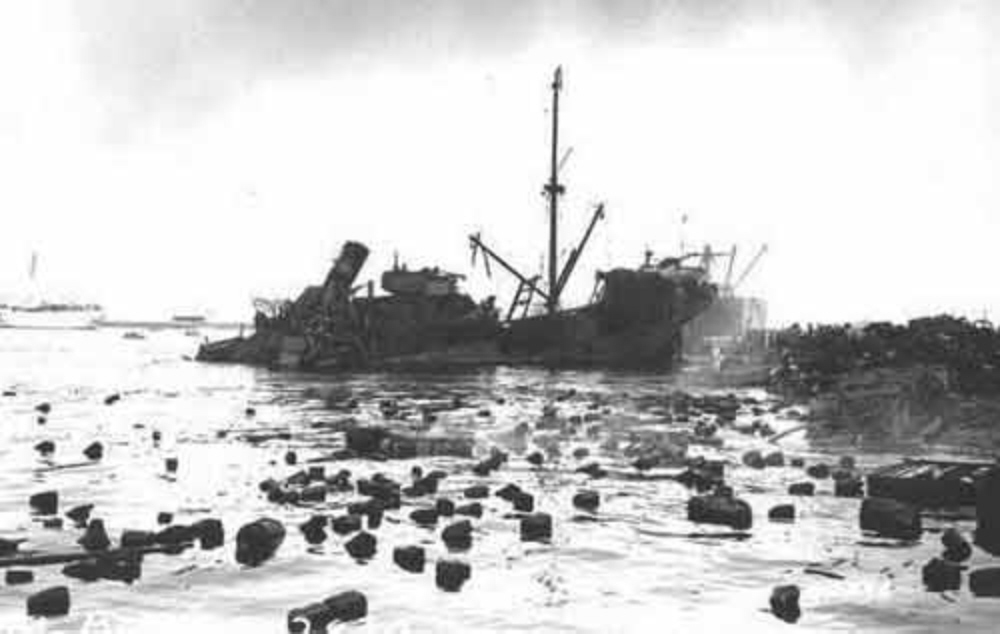 Above: The wreck of the D/S 'Bjorkhaug' after the explosion.

The docks were such a mess that the exact number of dead will probably never be known.

Sapper Arthur Worth, who died aged 20 years, is remembered on Face 10 of the Medjez-el-Bab Memorial, Tunisia. Medjez-el-Bab is located approximately 60 kilometres west of Tunis.