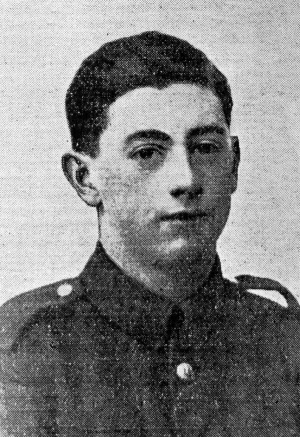 Oswald Grogan was born in 1896, the son of Irish immigrant Thomas Grogan and his wife Maria (nee Callaghan), who were married in 1895. Thomas Grogan was born in Co. Mayo, Ireland in 1875. In 1901, the Grogan family are living in a two-roomed house, part of a terrace, at "Horbury Road, The Rocks", which is now Sowood Avenue. Oswald has a sister Julia Grogan, born in 1895.

By 1911, the Grogan family has grown and there are two other children, Annie (7) and Tom (3), but a fifth child had died before 1911. They are now living in a two-roomed house at 20, Victoria Road, Dewsbury. Oswald's father Thomas Grogan is working as a hewer in a coal mine and Oswald is a 14 year-old hurrier in a coal mine.

Oswald Grogan enlisted at Dewsbury with KOYLI, service number 11061, and was later transferred to the 2nd Battalion, Leicestershire Regiment.

Private Oswald Grogan died of wounds on the 9th April 1916 during the Battle of Sannaiyat in Mesopotamia. He was the son of Mrs. Maria Grogan, of 17, Brigg's Old Row, South Ossett, Yorks and his father, Corporal Thomas Grogan, 16398, 8th Battalion, KOYLI was killed in action on the 25th August 1917 at the age of 42.

In the winter of 1915-1916 the 2nd Battalion, Leicestershire Regiment, as part of the 7th Indian Division, was transferred to Mesopotamia. It distinguished itself in the battles of Shaikh Saad, Kut-al-Amara, the various battles of Sannaiyat, and went on to the capture of Baghdad, when the Battalion had the honour of being the first troops to enter the city. In the winter of 1917-1918 the Battalion moved to Palestine, and took part in the victorious advance that defeated and captured the Turkish Army in the late summer of 1918.1

Undoubtedly, the campaign in Mesopotamia (modern Iraq) was hardest and most prolonged of any fought by the Leicesters in the Great War. The 2nd battalion arrived there from France, as part of the Indian Corps in December 1915. Its role was to strengthen the British Army's Tigris Corps, which was battling to reach Major General Townshend's force at Kut-al-Armara, then besieged by a far stronger Turkish army. Time and again the Tigris Corps hurled itself against the Turkish positions, and time and again it was thrown back in disarray.

In the light of our present knowledge it seems clear that the Turks were forced by the encroachment of water from the flooded Tigris to abandon prematurely their position at Umm al Hanna, and that the Falahiya trenches were only held to gain time for them to put their house in order at Sannaiyat, about three miles farther up the river. Here, with his right flank resting securely on the Tigris and his left guarded by the Suwaikiya Marsh, the enemy awaited our next move. On 6th and 7th April troops of the 7th Division made determined efforts to capture the Sannaiyat position, but the assaults failed with heavy loss, and a new line of shallow trenches some four hundred yards from the Turkish wire was the full measure of achievement on these two days. 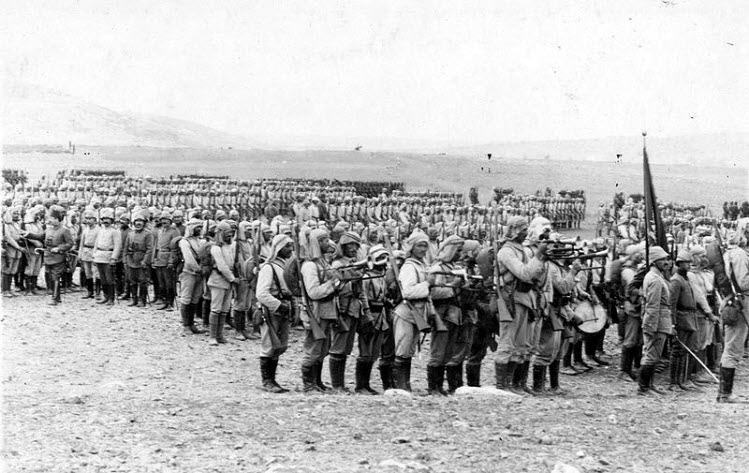 Finally, as a last throw of the dice, an attack was planned on the strong Turkish position at Sannaiyat, timed for the early morning of 9th April 1916; an attack, unfortunately for the defenders of Kut, which it was found impossible to push home and which ended in bloody failure. The 2nd battalion Leicestershire Regiment was reduced to five officers and 200 other ranks. The Kut garrison surrendered at the end of April, the biggest disaster to befall a British army in more than a century.2

The "Ossett Observer" 3 had this obituary for Private Grogan:

"Official intimation has come to hand that Lance-Corporal Oswald Grogan, of the 2nd Leicestershire Regiment, a South Ossett young man, has died from wounds sustained on April 9th on operations in the Persian Gulf. The deceased, who was only 19 years of age, and unmarried, was the son of Mr. Thomas Grogan of 17, Briggs' Row, Storrs Hill Road, South Ossett and his father is at present serving with the King's Own Yorkshire Light Infantry on the western front.

It was a few months before the outbreak of the war when the deceased joined the army, enlisting in the Kings's Own Yorkshire Light Infantry and later transferring to the Leicesters. For a couple of years or so previously he was employed as a conductor on the Dewsbury and Ossett tramways, and was well-known. His father enlisted in "Kitchener's Army" about eighteen months ago.

Lord Kitchener has forwarded a letter to the relatives, conveying the sympathy of the King and Queen, along with his own."

Private Oswald Grogan is remembered on Panel 12 of the Basra Memorial 4, Iraq. Until 1997 the Basra Memorial was located on the main quay of the naval dockyard at Maqil, on the west bank of the Shatt-al-Arab, about 8 kilometres north of Basra. Because of the sensitivity of the site, the Memorial was moved by presidential decree. The move, carried out by the authorities in Iraq, involved a considerable amount of manpower, transport costs and sheer engineering on their part, and the Memorial has been re-erected in its entirety. The Basra Memorial is now located 32 kilometres along the road to Nasiriyah, in the middle of what was a major battleground during the first Gulf War.

The Basra Memorial commemorates more than 40,500 members of the Commonwealth forces who died in the operations in Mesopotamia from the Autumn of 1914 to the end of August 1921 and whose graves are not known.