Between 1891 and 1911, the family lived at Chickenley Lane, Water Lane and latterly at Wilson Mill Yard, Chickenley, where Harry Newsome worked as a warehouseman for a mungo manufacturer. In 1911, Herbert Newsome was a rag shaker, probably in the same mill as his father. He had started work by the age of 14, working as a piecer in a mill.

Herbert Leslie Newsome, aged 28 years, enlisted at Dewsbury on 7th December 1915 and was posted to “D” army reserve until the 14th July 1916. He embarked from Southampton for France on the 16th February 1917, arriving at Le Havre the following day.

Gunner Herbert Leslie Newsome, of the Royal Garrison Artillery, 248th Siege Battery was killed in action on the 26th October 1917. In March 1918, his effects were returned to his widow, Clara. They included letters, photos, pocket wallet, safety razors and five blades, two watches and chain, disc, and two cigarette cases. Further unspecified effects were returned to her in January 1920.

Clara was awarded a weekly pension of 20s 5d for herself and her child, Mary, with effect from the 20th May 1918, but it appears that this was later challenged, and it is likely that the pension was payable from an earlier date.

The 248th Siege Battery of the Royal Garrison Artillery was posted with No. 1 ANZAC Heavy Artillery in October 1917, taking part in the Second Battle of Passchendaele, which started on the 26th October 1917. In October 1917, the 248th Siege Battery, with their 6" Howitzers, was located about 200 metres north-east of Birr Cross Roads at the edge of Romulus Wood. It is likely that Gunner Herbert Newsome was killed by enemy shelling.

"26th October: Attacked at 5:40 a.m. in conjunction with Canadian Corps on left and and X Corps on right. 2nd Australians captured their objective Decline Copse. Enemy shelling was irregular and not serious. X Corps did not hold their objectives but the Canadians did. Most of our artillery was devoted to counter battery work.

The 1st ANZAC Heavy Artillery reported casualties of 5 officers killed and 23 wounded, with 66 'Other Ranks' killed and 418 wounded during the month of October 1917." 1 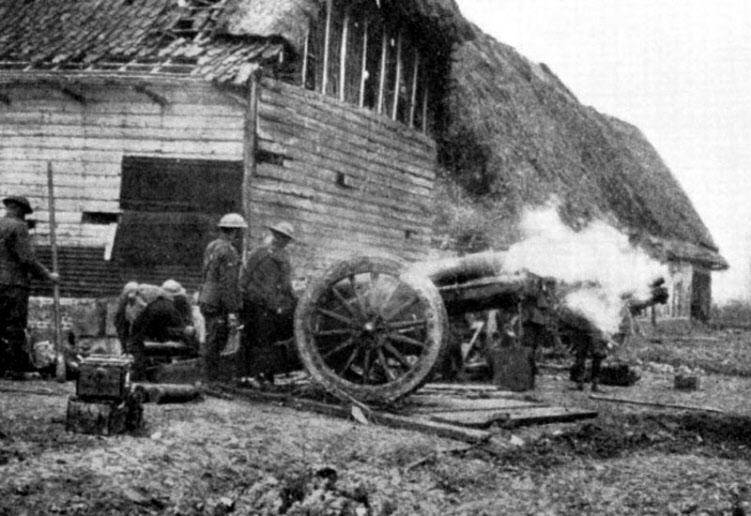 Above: British WW1 6" Howitzer like the ones in Gunner Newsome's 248th Siege Battery.

The village and the greater part of the commune of Zillebeke were within the Allied lines until taken by the Germans at the end of April 1918. The village was recovered by the II Corps on 8 September 1918.

Birr Cross Roads was named by the 1st Leinsters from their depot. The cemetery was begun in August 1917 and used as a Dressing Station cemetery until, and after, the German advance in 1918. At the Armistice, it contained nine irregular rows of graves, now part of Plot I, but was greatly enlarged when graves were brought in from the surrounding battlefields and from certain smaller cemeteries, including:

Bellewaarde Ridge Military Cemetery, Zonnebeke, was a little way North-East of Bellewaarde Lake, almost on the top of the low hill which rises northwards from the Menin Road between Hooge and Clapham Junction. It contained the graves of 17 soldiers from Australia, and eleven from the United Kingdom, who fell in September and October, 1917. The Battle of Bellewaarde Ridge was fought on the 24th-25th May, 1915; the Attacks on Bellewaarde were delivered, unsuccessfully, in June and September, 1915; and the Ridge, taken in July, 1917, and given up in April, 1918, was finally retaken by the 9th (Scottish) Division on the 28th September, 1918.

Birr Cross Roads Cemetery No.2, seventy-five metres South of No.1 (the present cemetery), contained the graves of 18 soldiers from the United Kingdom who fell in July and August, 1917.

Union Street Graveyards No.1 and No.2, Zillebeke, were due North of Zillebeke village, between Gordon House and Hell Fire Corner. They contained the graves of 19 soldiers from the United Kingdom who fell in August and September, 1915.

There are now 833 Commonwealth servicemen of the First World War buried or commemorated in this cemetery. 336 of the burials are unidentified, but there are special memorials to nine casualties known or believed to be buried among them. Other special memorials commemorate 18 casualties buried in Birr Cross Roads Cemetery No.2 and the Union Street Graveyards, whose graves were destroyed by shell fire, and one Belgian interpreter whose grave cannot now be found.

1. War Diary of the 1st ANZAC Heavy Artillery for October 1917