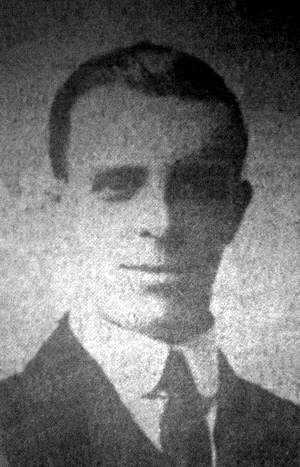 The 1st/7th Battalion of the Duke of Wellington's (West Riding Regiment) was formed at Milnsbridge, Huddersfield in August 1914 as part of 2nd West Riding Brigade, West Riding Division. The battalion moved on mobilisation to coastal defences near Hull and Grimsby and then on the 5th November 1914 to billets in Doncaster. On the 14th April 1915, they landed at Boulogne and on the 15th May 1915, the formation became 147th Brigade in 49th (West Riding) Division.

The "Ossett Observer" 1 had this report about Private Harry Hemingway being missing:

"No further information has been received of Private John Akeroyd of the K.O.Y.L.I., whose wife and family reside at Manor-road, Ossett or Private Harry Hemingway, whose parents reside in Crown-street, South Ossett, both of whom have been missing for some months."

The 1st/7th West Riding Regiment carried out it's first major offensive at Thiepval on the 17th September 1916, as part of the Battle of Flers-Courcelette. Prior to this, the battalion had been 'in support' or 'in reserve'. The assault on the German trenches was a major success and all objectives were taken, but the casualties sustained were heavy compared with earlier engagements.

“The assault was made in four waves at intervals of fifteen, twenty and fifteen feet, the unit being a Platoon. A Bomb Squad, consisting of one NCO and eleven other ranks, accompanied each half Company, and every man in the last two waves carried either a pick or a shovel. Report Centres, main and subsidiary, Battalion scouts, and other special parties were detailed for duty, and all Troops were reported in position at 6 pm. Nearly everything went right, except that a portion of D Company, including both Lewis guns and their detachments, were believed to have advanced towards the Row of Apple Trees, and were either taken prisoner or wiped out by machine gun fire. About 7 o’clock reports were received that the objective had been captured, though it was doubtful how the left flank had fared. The total casualties in this little action were five officers and 215 other ranks.” 2

Above: A stretcher borne wounded soldier waves his helmet as he is carried in by German prisoners, near Ginchy, 15th September 1916, at the Battle of Flers-Courcelette.

On the 1st July 1916, supported by a French attack to the south, thirteen divisions of Commonwealth forces launched an offensive on a line from north of Gommecourt to Maricourt. Despite a preliminary bombardment lasting seven days, the German defences were barely touched and the attack met unexpectedly fierce resistance. Losses were catastrophic and with only minimal advances on the southern flank, the initial attack was a failure. In the following weeks, huge resources of manpower and equipment were deployed in an attempt to exploit the modest successes of the first day. However, the German Army resisted tenaciously and repeated attacks and counter attacks meant a major battle for every village, copse and farmhouse gained. At the end of September, Thiepval was finally captured. The village had been an original objective of the 1st July. Attacks north and east continued throughout October and into November in increasingly difficult weather conditions. The Battle of the Somme finally ended on the 18th November with the onset of winter.

In the spring of 1917, the German forces fell back to their newly prepared defences, the Hindenburg Line, and there were no further significant engagements in the Somme sector until the Germans mounted their major offensive in March 1918.

The Thiepval Memorial, the Memorial to the Missing of the Somme, bears the names of more than 72,000 officers and men of the United Kingdom and South African forces who died in the Somme sector before 20th March 1918 and have no known grave. Over 90% of those commemorated died between July and November 1916. The memorial also serves as an Anglo-French Battle Memorial in recognition of the joint nature of the 1916 offensive and a small cemetery containing equal numbers of Commonwealth and French graves lies at the foot of the memorial.