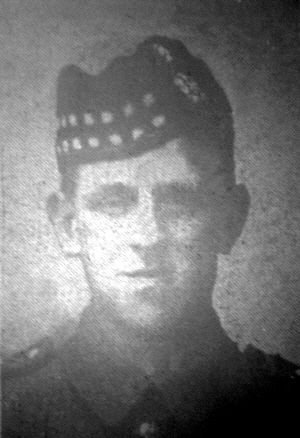 Ernest Smith was born in Ossett on the 25th January 1895 and baptised on the 3rd March 1896 at the Wesleyan Methodist Chapel, Ossett. Ernest was the only son of Ossett shoemaker Percy Smith and his wife, Margaret Alice (nee Harrison), of Altofts who married at Woodkirk in 1892. The couple had two children, Ernest and a younger sister, Edith born 1897.

In 1895, Percy and Margaret Alice Smith were living on Bank Street, Ossett, but by 1901 the family had moved to Littlefield Road, Ossett. By 1911 they had moved again, this time to 12, King Street, Ossett, where Ernest, now aged 16, had begun work as a piecener for a cloth manufacturer.

Ernest Smith’s army service record has not survived but it is known that he was living in Batley when, in October 1916, he enlisted at Dewsbury and joined the Royal Scots Fusiliers with the service no. 202276. He embarked in June 1917 and died on the 1st August 1917.

Private Ernest Smith was posthumously awarded the British and Victory medals, but did not qualify for the 1914/15 Star, indicating that he had not served overseas before the 31st December 1915.

The 6th (Service) Battalion of the Royal Scots Fusiliers was formed at Ayr in August 1914 as part of K1 and came under orders of 27th Brigade, 9th (Scottish) Division. They moved to Bordon and again in February 1915 to Bramshott. On the 11th May 1915, the battalion landed at Boulogne and on the 7th May 1916, they transferred to 45th Brigade, 15th (Scottish) Division and amalgamated with 7th (Service) Battalion to become 6/7th Battalion.

Ernest Smith died at the Battle of Pilckem Ridge, which took place between the 31st July and the 2nd August 1917. The 15th (Scottish) Division being in the thick of the action on the 31st July 1917:

"To the immediate right of XVIII Corps, the XIX (Watts) was accomplishing the greatest initial advance of the day. On this section of the front, the troops had to press forward over three low ridges (Pilckem, St. Julien and London), capture three German defensive lines, and push just beyond them. By early afternoon almost all of this had been accomplished.

The leading brigades of 55 and 15 Divisions had taken Pilckem Ridge and were on the St. Julien Spur, and the reserve brigades were about to attack through the London Ridge. This advance had not been without cost. The divisions had encountered a group of untouched blockhouses near the German second and third lines, which had been subdued only with heavy casualties.

As on other fronts, the creeping barrage had thinned as the troops progressed. Nevertheless, the reserve brigades, which to some extent had to fight their way past some blockhouses that were still holding out, advanced to London Ridge on schedule.

Yet the ground gained was proving insecure. For one thing, in front of 55 Division, enemy troops were massing for a counter-attack. More ominously, on the right of 15 Division, machine-gun fire was being employed against British forces from the rear." 1

The "Ossett Observer" 2 had this note about Ernest Smith being missing in action:

"Unknown Fate Of An Ossett Soldier - Enquiries relative to Private Ernest Smith (22), of the Royal Scots Fusiliers, the only son of Mr. Percy Smith, shoe maker, of Lionel-street, off Station-road, and Bank-street, Ossett, from whom nothing has been heard since July 28th, have elicited an official notification from the Army Records Office to the effect that the soldier is missing from his regiment. Private Smith joined the military forces in October last year, and went to the Western front early in June last. In civilian life he worked in the spinning department of Messrs. G. Harrop and Sons' Albion Mills, Horbury Bridge. Before going out to France he married a Birstall young woman. In the last letter received from him, Private Smith said that he expected being moved 'up the line' and letters since addressed to him have been returned to the senders marked 'wounded, not rejoined unit' or 'hospital', etc."

Above: British soldiers at Pilckem Ridge on the 31st July 1917.

Private Ernest Smith, aged 22 years, son of Percy Smith, of Lionel Street, Ossett, died on the 1st August 1917. He is remembered on Panel 19 and 33 at the Ypres (Menin Gate) Memorial 3, Ieper, West-Vlaanderen, Belgium. Ypres (now Ieper) is a town in the Province of West Flanders. The Memorial is situated at the eastern side of the town on the road to Menin (Menen) and Courtrai (Kortrijk).

The Salient was formed during the First Battle of Ypres in October and November 1914, when a small British Expeditionary Force succeeded in securing the town before the onset of winter, pushing the German forces back to the Passchendaele Ridge. The Second Battle of Ypres began in April 1915 when the Germans released poison gas into the Allied lines north of Ypres. This was the first time gas had been used by either side and the violence of the attack forced an Allied withdrawal and a shortening of the line of defence.

There was little more significant activity on this front until 1917, when in the Third Battle of Ypres an offensive was mounted by Commonwealth forces to divert German attention from a weakened French front further south. The initial attempt in June to dislodge the Germans from the Messines Ridge was a complete success, but the main assault north-eastward, which began at the end of July, quickly became a dogged struggle against determined opposition and the rapidly deteriorating weather. The campaign finally came to a close in November with the capture of Passchendaele.

The German offensive of March 1918 met with some initial success, but was eventually checked and repulsed in a combined effort by the Allies in September.

The battles of the Ypres Salient claimed many lives on both sides and it quickly became clear that the commemoration of members of the Commonwealth forces with no known grave would have to be divided between several different sites.

The site of the Menin Gate was chosen because of the hundreds of thousands of men who passed through it on their way to the battlefields. It commemorates casualties from the forces of Australia, Canada, India, South Africa and United Kingdom who died in the Salient. In the case of United Kingdom casualties, only those prior 16 August 1917 (with some exceptions). United Kingdom and New Zealand servicemen who died after that date are named on the memorial at Tyne Cot, a site which marks the furthest point reached by Commonwealth forces in Belgium until nearly the end of the war. New Zealand casualties that died prior to 16 August 1917 are commemorated on memorials at Buttes New British Cemetery and Messines Ridge British Cemetery.

The Ypres (Menin Gate) Memorial now bears the names of more than 54,000 officers and men whose graves are not known.