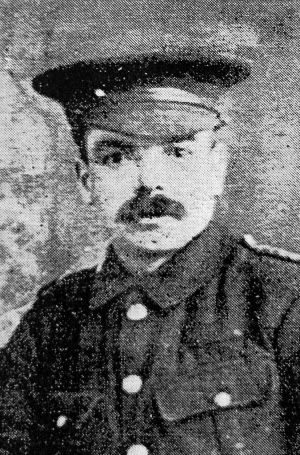 David Rothery was born at Kilpin Hill, Staincliffe, Batley in 1875, the son of George Rothery and his wife Annie (nee Harrison), both born in Heckmondwike, who had married in 1876 in the Wakefield registration district. David's father George Rothery worked as a blanket weaver.

In 1911, David Rothery was living at 43, Chancery Lane, Ossett with his wife Emma Jane (nee Cooper) whom he had married in 1896 in the Dewsbury registration district. They had a daughter, Winifred May Rothery aged 11 and David was working as hewer in a colliery.

He enlisted on the 2nd of September 1914 as a volunteer, first with the Duke of Wellington's (West Riding) Regiment before transferring later to the 2nd Battalion, KOYLI, which in 1914 was in Dublin and on the 16th August 1914, landed at Le Havre as part of the B.E.F. 13th Brigade in 5th Division. Private Rothery disembarked in France on the 2nd December 1914.

2nd Battalion KOYLI had been in France with 13th Brigade, 5th Division, since August 1914, participating in Mons and the subsequent retreat, Battle of the Marne, Battle of the Aisne, the La Basee front, then moving north to participate in the First Battle of Ypres.

During April and May 1915, there was heavy fighting on and around Hill 60 in Belgium. Hill 60 is situated about two miles south east of Ypres; it consists of a heap of soil piled up about fifty years before the war during construction of the Ypres to Comines railway. Before the war it was a popular picnic site, and was known to the locals as the Cote des Amants - or the Lovers Knoll. Five tunnels were dug under the German positions on the hill by the 171st Tunnelling Company and loaded with 58,000 pounds of explosives.

Zero hour was set for 19:00 hours on the 17th April 1915. At 19:05, three officers of the 171st Tunnelling Company hit the plunger; the resulting explosions ripped the heart out of the hill over a period of some 10 seconds. It flung debris almost 300 feet into the air and scattered it for a further 300 yards in all directions. One British soldier who peered over the parapet was violently hit in the face by a piece of debris and was killed.

As mud-lumps, sandbags, trench timbers and shattered German bodies were still spinning in the air, a huge Allied bombardment commenced saturating the German lines with fire and shrapnel. An attacking formation of Royal West Kent's, 2nd Kings Own Scottish Borders (with 2nd Duke of Wellingtons in support) and 1/9th (Queen Victoria Rifles), London's (with 2nd Kings Own Yorkshire Light Infantry in support - their monument stands proudly on the summit of the hill to this day and the cafe/museum opposite also bears their name) with bayonets fixed, scrambled up the hill.

As the assaulting party closed on what was left of the German 172nd Regiment holding the hill, the dazed German's screams could be heard over the din, as the British bayonets pierced them. Approximately 150 died, with only 20 being taken prisoner. Total British casualties were just seven. A counter-attack that night by the Germans inflicted heavy casualties on the defenders, forcing the British off the hill, although on the next day, 18th April, the 2nd Duke of Wellingtons and 2nd Kings Own Yorkshire Light Infantry re-took the hill in a fresh attack.1

2nd KOYLI moved to Ypres, followed on the 18th by a move to Larch Wood, they took part in the attack on Hill 60, where "B" & "C" led the assault at 18.00 hours, immediately the men left the trenches they were subjected to artillery, machine gun and rifle fire. Despite the enemy fire that the Battalion were faced with the assault pressed forward, the Battalion War Diary reads:

"These companies however reached the base of the hill and dashing up the slopes - crossed the German parapet and the crest was retaken" - "Positions held under heavy bombardment and counter attacks" - "Furious combats took place in the craters, which were filled with killed and wounded."

Rifles became jammed from the heat of firing-grenades and ammunition could not be brought forward. The diary makes note of the fact that had it not been for the weapons and ammunition left by the fleeing Germans which were put to good use by the men the hill would have been difficult to hold. The 2nd KOYLI were relieved at dawn on the morning of the 19th, April. Casualties are shown as being 239 killed, wounded and missing.

The "Ossett Observer" 2 had this short obituary for David Rothery:

"David Rothery of the King's Own Yorkshire Light Infantry, a married man whose home is in Chancery-lane, Gawthorpe, is reported to have been struck by a shell and killed in the operations which resulted in the capture of Hill 60 by the British forces."

Private David Rothery died of wounds on the 18th of April 1915 at the age of 40. He was the son of the late George and Susannah Rothery and the husband of Emma Jane Rothery, of 43, Chancery Lane, Street Side, Ossett, Yorks. He was awarded the Victory Medal, the British Medal and the 1915 Star posthumously.

Private Rothery is remembered on Panel 47 at the Ypres (Menin Gate) Memorial 3, Ieper, West Vlaanderen, Belgium. Ypres (now Ieper) is a town in the Province of West Flanders. The Memorial is situated at the eastern side of the town on the road to Menin (Menen) and Courtrai (Kortrijk).

The site of the Menin Gate was chosen because of the hundreds of thousands of men who passed through it on their way to the battlefields. It commemorates casualties from the forces of Australia, Canada, India, South Africa and United Kingdom who died in the Salient. In the case of United Kingdom casualties, only those prior 16 August 1917 (with some exceptions). The Ypres (Menin Gate) Memorial now bears the names of more than 54,000 officers and men whose graves are not known.