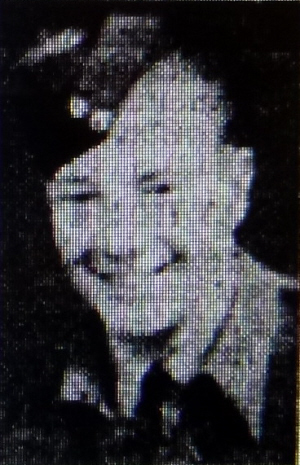 Rowland Dennis George was born in Dewsbury in the Spring of 1921, the son of Rowland George and Hilda George (nee Andrews), who had married in the Summer of 1920 in Dewsbury. Rowland had a brother, Alan Andrew George who was born in Ossett in 1930.

Rowland George senior was born in Dewsbury on the 24th June 1899, and was living with his parents at Alfred Place, Dewsbury in 1901. He was the youngest child and only son of four children. In late 1905, his father, an iron planer, died aged 49 years. By 1911, his widowed mother and four children, including Rowland senior, were living at Springfield Cottage, Scargill Street, Dewsbury.

In 1939, Rowland George senior, a Water Works Manager and an Air Raid Warden was living with his wife, Hilda, and two sons at Water Works House, Pildacre, Ossett. The younger son, Alan Andrew George, born on the 12th February 1930 was still at school. The details for Rowland Dennis George are redacted. His mother, Hilda died in early 1978 and his father, Rowland senior, died in spring 1983. His only sibling, Alan Andrew George died in 2008 aged 78 years.

The "Ossett Observer" had this short obituary for Sergeant Rowland George:1

"Ossett Airman's Death - We regret to announce the death, at the age of twenty-three, of Sergeant Rowland Dennis George, RAF, son of Mr. and Mrs. Rowland George, Waterworks House, Pildacre, Ossett. An A.A. gunner, stationed at Cranwell, he was sent to Filey for a special course, and on Sunday week, as a result of illness, was admitted to Scarborough Emergency Military Hospital. His family were summoned to his bedside on Sunday last, and he passed away the same night from peritonitis.

He had lived in Ossett 12 years and attended Holy Trinity and Batley Art Schools. He was employed by Mr. Shaw Peace, printer, up to joining the Forces, three years ago. He attended The Green Congregational Church and was a member of Toc H. He was much esteemed, and the deepest sympathy is felt with the family and their loss."