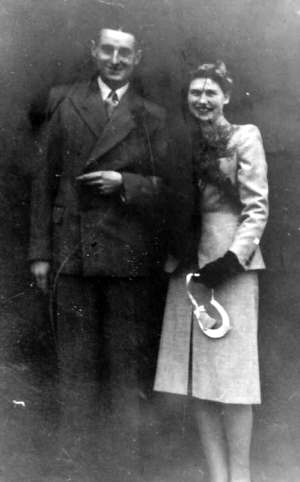 Cyril Broadbent was born in early 1913. He was the son and youngest child of Barber and Minnie Augusta (nee Salmon) Broadbent, who married at Batley Parish church on the 21st June 1900. Barber like his father and grandfather, was a publican, born on the 17th May 1871, in Batley. His wife Minnie Augusta Salmon, was born 1870 was also the daughter of a publican.

Barber’s grandfather ran the Victoria Hotel at Bradford Road, Batley. In 1901, Barber was recorded as a publican, but was then living as a patient at Tower House Retreat at Westgate on Sea, Isle of Thanet, Kent.

Built in 1879, and founded through the Inebriates Act 1879, Tower House Retreat was the only building in England designed for the housing of "ladies and gentlemen desirous of overcoming acts of intemperance". The inhabitants were given uniquely minted coinage as a weekly allowance, which could be exchanged in local amenities with the exception of hotels and public houses.

By 1911, Barber and Minnie Broadbent were living at 8, Soothill Lane, Batley with their five children born by that time. Cyril was to be the sixth child and the youngest. By this time Barber was a retired publican, aged 39 years and his wife of 10 years, Minnie Augusta, originally of Horbury Bridge, was 40 years old.

Cyril Broadbent married Jeannie Roberts of West Ardsley at Woodkirk St Mary’s Church in the summer of 1941. Following the sad loss of her husband Cyril in 1945, Jeannie re-married to Arthur Gibson in summer 1953. Cyril Broadbent and his wife Jeannie are pictured left after their marriage.

Others died crossing the Rhine, among them members of the airborne forces whose bodies were brought from Hamminkeln, where landings were made by the 6th Airborne Division from bases in England. Some of the airmen buried in the cemetery lost their lives in supporting the advance into Germany, but most died earlier in the war in the intensive air attacks over Germany. Their graves were brought in from cemeteries and isolated sites in the surrounding area.

There are now 7,594 Commonwealth servicemen of the Second World War buried or commemorated in the cemetery. 176 of the burials are unidentified. There are also 78 war graves of other nationalities, most of them Polish.