John William Asquith was born in Ossett in 1891, the son of Stephen Asquith and Asenath (nee Tindall) who married in Wakefield in 1883. Asenath Tindall was the daughter of a Flockton born Shepherd, John Tindall. John William was the sixth of seven children born to the couple, two of whom had died before 1911. John William is referred to only as John in the censuses.

In 1891 the family are living on Wesley Street Ossett where, Flockton born, Stephen Asquith is working as a wheelwright. Next door, Stephen’s elder brother, George Asquith, is living with his family and working as a blacksmith. It seems likely that the family had only recently moved to Ossett in the late 1880s.

By 1901 the two families are still living on Wesley Street at Pildacre Hill, but John William’s father and uncle are now both working as gardeners. Next door to the Asquith's house is Pildacre Pit Yard.

In 1911, John, now aged 19, is living with his parents and two of his siblings at the three-roomed house at 2, Pildacre, Ossett. His father is working as a carpenter at a local colliery, most probably the adjacent Pildacre Pit. John is working as a warper in a local mill.

7th (Service) Battalion of the Alexandra Princess of Wales's Own (Yorkshire Regiment) was formed at Richmond, Nortyh Yorkshire in September 1914 as part of the Second New Army (K2) and then moved to Wareham joining the 50th Brigade of the 17th Division. In May 1915, they moved to Romsey and on the 14th July 1915, they mobilised for war and landed at Boulogne and engaged in various actions on the Western front including; 1915, holding front lines in the southern area of Ypres salient. In 1916, The Battle of Albert, The Battle of Delville Wood. In 1917, The First Battle of the Scarpe, The Second Battle of the Scarpe, The Capture of Roeux, The First Battle of Passchendaele, The Second Battle of Passchendaele. On the 19th February 1918, the Battalion was disbanded and all remaining personnel transferred to the 6th, 12th and 13th Battalions.

John Asquith was killed in action on the 12th May 1917 in the first Battle of the Scarpe, which was one of the opening engagements in the Battle of Arras. His WW1 service record has not survived and his medal card records only that he was awarded the British and Victory medals.

The "Ossett Observer" 1 had this obituary for John W. Asquith:

"Private John William Asquith (26), 7th Yorkshire Regiment, the son of Mr. Stephen Asquith of Snydale, near Wakefield, and formerly of Pildacre, Ossett, who was reported missing in May last, is now officially reported killed. Deceased joined the army two years ago, and previously lived with a married sister in Teall-street, Ossett Common. Before joining the army, he was employed by Messrs. Jonas Glover Ltd., Westfield Mills. He was well-known in football circles, having played with several clubs in Ossett and district."

During the Arras offensive, between the 9th and 11th May, the 7th Battalion of the Yorkshire Regiment took over front-line trenches north of the River Scarpe. An attack was planned along the full corps frontage, the 7th Battalion's objective being Cupid, Cash and Charlie trenches. The battalion attacked with the 1st East Yorks on their left and the 1st Rifle Brigade on their right. Between the 11th and 15th of May the 7th Battalion was involved in four days of almost continuous fighting, “men in the front line were exhausted and there was no drinking water." The battalion had gone into the line with 18 officers and 436 other ranks and when they came out on May 15th there were only 5 officers and 228 men left. One of these casualties was Private John William Asquith. 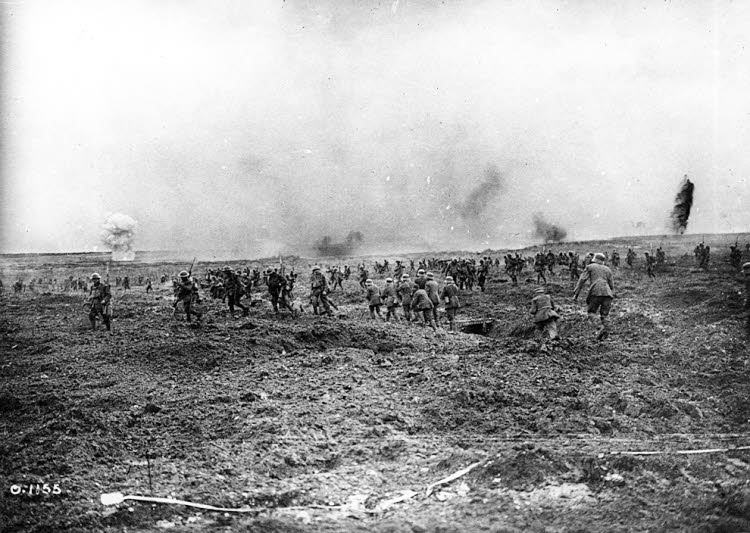 Above: German soldiers surrendering their trenches in one of the opening battles of Arras in April/May 1917.

Private Asquith is remembered on the Bay 5 of the Arras Memorial 1 located near Pas-de-Calais in northern France. The French handed over Arras to Commonwealth forces in the spring of 1916 and the system of tunnels upon which the town is built were used and developed in preparation for the major offensive planned for April 1917.

The adjacent Arras Memorial commemorates almost 35,000 servicemen from the United Kingdom, South Africa and New Zealand who died in the Arras sector between the spring of 1916 and 7 August 1918, the eve of the Advance to Victory, and have no known grave. The most conspicuous events of this period were the Arras offensive of April-May 1917, and the German attack in the spring of 1918. Canadian and Australian servicemen killed in these operations are commemorated by memorials at Vimy and Villers-Bretonneux. A separate memorial remembers those killed in the Battle of Cambrai in 1917.