Gladys Mary Mitchell was born in Ossett on the 13th September 1889, the youngest child and fourth daughter of five children born to Rag & Mungo Merchant George William Mitchell and Hannah (nee Speight) who married in Ossett in the December Quarter of 1875. Gladys was baptised at Ossett Wesleyan Chapel, Ossett on the 23rd October 1889 and the family lived on Dale Street, Ossett.

In 1901, George William Mitchell, wife Hannah, their four girls and one boy were living at Ash Villa, Dale Street, Ossett. None of the children: Emma (born 1877), Gertrude (1879), Marie Elsie (1881), George (1886) and Gladys, were working even though they were all of an age to do so. By 1911, George William was 69 years of age, but still working as a mungo merchant, and his wife Hannah was 60 years old. Only two of their daughters: Gertrude and Gladys Mary, remain at home at their seven-roomed home at 'Wellfield', Dale Street, Ossett. Gladys Mary’s father, George William Mitchell, died aged 72, in early 1914.

On the 12th March 1918, Gladys Mary Mitchell, aged 28, of 'Wellfield', Dale Street, Ossett married 24 year-old George Edward Jessop at the New Wesleyan Chapel, Wesley Street, Ossett. George Edward was the son of Arthur Jessop, wool extractor of 'Green Lea', Healey Road, Ossett. Before WW1, George Edward worked with his father in the business, but at the time of his marriage he was a Lieutenant in the West Yorkshire Regiment. He was subsequently attached to the Northumberland Fusiliers and sadly he was killed in action on the 10th April 1918, less than a month after his marriage to Gladys.

On the 1st October 1918 Gladys Mary Jessop of 'Wellfield', Ossett was engaged as a Voluntary Aid Detachment (VAD) Nursing Sister and undertook her nursing duties at St. John’s Auxiliary Hospital, Wentworth House, Wakefield. Whilst the commencement of her service as a Voluntary Aid Detachment (VAD) Nurse began less than six weeks before the Armistice, her engagement continued until 28 February 1919. 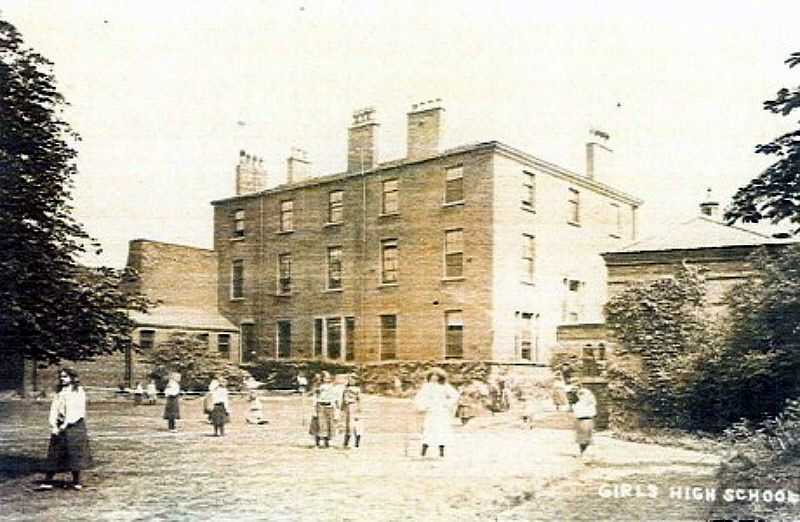 Above: The former Wentworth House at Wakefield Girls High School.

At a time when Gladys Jessop was still grieving the loss of her husband of only four weeks, she reached out to help other soldiers, unfortunate in their circumstances, but more fortunate than the man she loved. Gladys Mary Jessop was surely a special woman?

In 1905 the British Red Cross was reorganised and links established with the War Office and later with the Territorial Forces Associations. In August 1909 the War Office started its scheme of voluntary aid organisation based on male and female Voluntary Aid Detachments to the Sick and Wounded (VADs) to be organised for their local Territorial Forces Associations by the Red Cross. Basic first aid and nursing training was to be given by the St John Ambulance Brigade. Over 47,000 VADs were employed on various tasks, only the best known being nursing, in August 1914. By 1920 there were more than 82,000. Both men and women could join the VADs.

Thousands of young women from middle-class homes with little experience of domestic work, not much relevant education and total ignorance of male bodies, volunteered and found themselves pitched into military hospitals.

On the 2nd June 1920, Gladys Mary Jessop, aged 30, of Wellfield, Ossett, married 29 year-old widower and solicitor, William Henry Colbeck of 'Sunny Bank', Balne Lane, Wakefield. Gladys’ brother George and her sister, Gertrude, were witnesses to the marriage. The couple subsequently lived at 56, Shaftsbury Avenue, Roundhay, Leeds. There is no record of children being born to to the couple and Gladys Mary Colbeck died in Leeds in September 1948, aged 58.